I sit in this chair,
Thinking about how life isn’t fair.
If only I could drop everything,
And travel without a dare.

To simply travel with the flow,
How I would love to make it so.
I’m envious of the people,
Who can just drop everything and go.

. . . Ugh, I can’t write anymore of this garbage. I’ve read this story too many times to count. If you’re stuck in a rut take up a hobby or something. And before you say it’s a waste of time clearly it can’t be any less of a time-waster than what you’re doing now or else you wouldn’t be complaining about being in a rut to begin with.

Let’s talk about music for a moment.

My favourite album from the past month is easily ‘Vichada’ by Kashka. But then again I’m arguably in love with the lead singer, Forest City Lovers (Kat’s former project) is my favourite band, I’ve recently gotten into synth pop in the last year and I’m generally easily persuaded by any woman who can belt out a decent tune so I’m pretty bias on the matter. Have a listen anyway: http://kashka.bandcamp.com/

I bought the cassette and just got it the other day along with this postcard. Whenever anybofy asks me why I’m a fan of Kat Burns at any point in the future I’ll just point them to this: 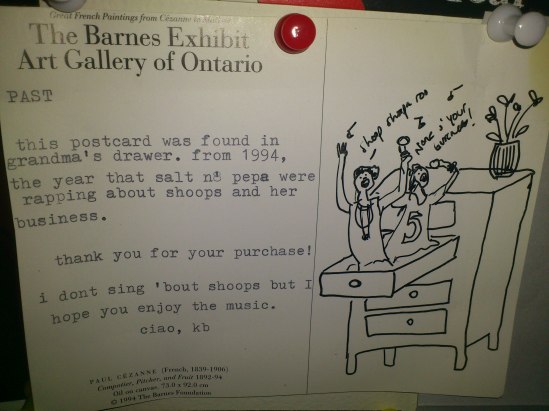 I love music. I love having a 5500+ song collection that’s 99.9 percent legally owned. I don’t have the patience to create any of my own however. I generally pick up an instrument, learn how to play something that’s like 20 notes long and drop it after spending a total of an hour or so, never to touch it again.

I don’t believe I’m really going anywhere with this. So here’s a .swf of Colin Mochrie dancing and a picture of a bee on the beach: http://internet.thoughtdump.net/DancingColin.swf 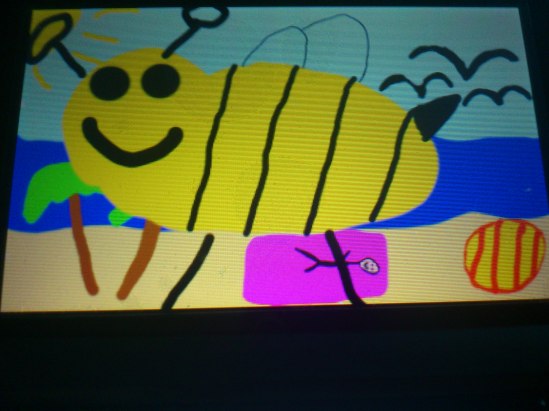