As many of us curse ourselves for continuing to write down ‘2012’ on various forms for the next few weeks many more of us will break promises that we have made to ourselves in wake of the new year. Personally I’m going to dread going to the gym since the next six weeks is pretty much the worst time to go ever if you’re already a regular. But I digress.

Then there are those who feel that the concept of New Year’s Resolutions are silly. Why pick that particular time to plan a life change? Shouldn’t you try to improve yourself year-round? Until earlier today I was in that mindset myself.

But then I thought about the things I would like to change in my life. I thought about how I spend too much time on Reddit/other pointless timekillers and less time doing things like socializing or even finishing my massive back log of games/books/albums I’ve yet to listen to. That led into me thinking about how I could probably be a better significant other at times, and from there I started to think about things I could change about myself.

In the shower just now it hit me. New Year’s Resolutions are important because it’s a reminder to sit down and think about our problems rationally and come up with solutions. Even if we generally fail at said solutions many people wouldn’t even attempt them had they not been forced to think about what it is they would want to change in the first place. I felt a little stupid because this way of thinking is exactly the type of thing I was taught is extremely important when I was in therapy for my Generalized Anxiety Disorder, and as such I feel like I should’ve figured this out long, long ago.

So with that said I’m going to attempt to get off the temp train this year (For those who aren’t in the know, I’ve been working a variety of temporary jobs for quite awhile now), try to be more proactive with my hobbies (And spend less time looking at badly captioned photos and live streams of games I don’t even care about [Except for you Jay, there’s always time to hassle you ha ha]), put some effort into making bees interesting again (Instead of copping out and using MS Paint all the time) and stop telling my girlfriend that she’s a poopface all the time.

Or at least do it less frequently. ❤

Speaking of her, she went out last night but left me this little note. She’s kind of the best. 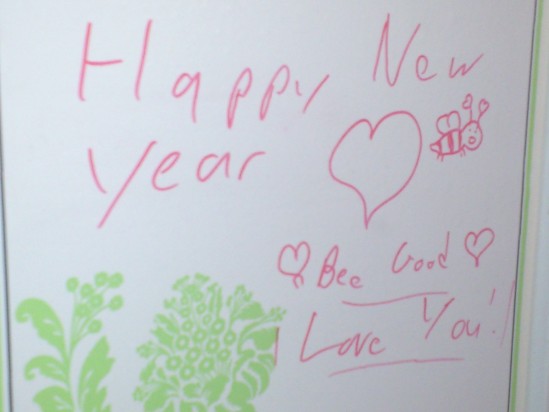